The Holo-Projectors are perhaps the most recognizable devices in an R2 unit, on the other hand they are very important within the events in the saga, since R2 projects the famous leia message.

To get the most realism to these devices, since current technology does not allow displaying a hologram as we saw on the big screen, what you can do is try to emulate this action so that it seems that an image is being projected when in fact it is a stroboscopic effect.

Holo-Projectors are devices that have two types of effects, one light and one motion. By equipping them with two small servos, they can be moved in two coordinates (vertical and horizontal).

To achieve these objectives, the proposal I set up for my unit is a metal Holo-Projector (aluminum) and printed parts to house the electronics and servos.

Each Holo-Projector circuit consists of a powerful led with 10 Neopixel-type mini-leds and outputs to connect two servos for X and Y movement.

The electronics consist of an arduino-nano, an LDO regulator that allows it to be powered from 9v up to 30v without problems and conditioning for the R2-Net system.

In this way, the circuit controls the LEDs and the two servos with complete autonomy.

The circuit has a set of 4 bridge dips (SETUP) that allow the electronics to work independently (Without R2-Net), this opens up the possibilities for everyone to adapt it to their droid.

The functions of the Dip SETUP are as follows:

It is also possible to combine Dip A with one of the colors to achieve a fixed color with movement, for example: To get a Red Holo with movement, it would be necessary to bypass Dip A and Dip R 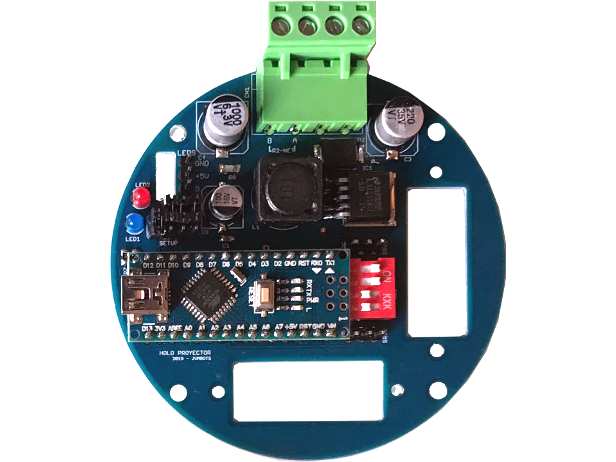